The Sales Target Is Exceeded. Pushing The Sales Circulation Of Automobiles To Continually Grow.

“The 42nd Bangkok International Motor Show”, held from 24 March to 4 April, 2021, has received the sales volume of 27,868 units, accounting for 51.5 percent of growth comparing to the last year’s event, which is the outcome of campaigns offered by auto companies to stimulate the sales circulation. Meanwhile, the visitors are confident in the safety measures arranged by the organizer, resulting in a high number of visitors of over 1.34 million people.

Mr. Jaturont Komolmis, Chief Operating Officer of Grand Prix International Public Company Limited as Vice Chairman of “The 42nd Bangkok International Motor Show”, reveals that “Over 42 years, the Bangkok International Motor Show has received confidence from the auto companies and motorcycle companies that believe in the potential of the show that it helps stimulate the sales circulation during the remaining time of the year, and it is the show that everyone has been waiting for because it is the perfect time to buy a new car since there are various promotions and campaigns that stimulate the sales volume.”

“Although earlier, we get affected by the COVID-19, causing the sale volume to decrease comparing to the normal situation, this year’s sales circulation has shown that the number of sales augments from the last year by 51.5 percent. It is believed that the purchasing power of Thai people has never gone, but it just needs to be in the proper time, especially when granted support by the financial institutions in organizing campaigns and promotions of auto companies, which makes it easier for customers to buy a new car according to various conditions, which can be chosen to suit customers’ needs. ”

“In terms of customer behavior, this year, customers respond well to new models, which were launched before the show period and open for reservation at the show for the first time. It can be seen from the atmosphere of the sales negotiation that is intense like every other year, especially during the weekends that the number of reservation increases twice from weekdays. However, due to the consumer behavior that is changed to befit with the saving period, they are looking for the car that responds well in terms of worthiness. Meanwhile, the luxury car market continues to grow as targeted because each company has launched their new models to provoke the sales circulation.”

“Especially for Great Wall Motor (GWM), which was once joined Bangkok Motor Show 7 years ago. This time they return with introduction of various models, which was successful to capture visitor’s attention. It is very interesting what will they bring to the show next year.”

“The important issue is that the preventive measures of the COVID-19 epidemic, which the organized has strictly prepared, has created confidence in safety, which makes the overall picture of this year’s show greatly successful like the massage that our team is trying convey, which is “Shaping The Next Chapter”. Even though this is a tough moment, the show has presented the potential of The Bangkok International Motor Show that it is always the event that everyone is waiting for because ‘it generates incomes, jobs, and smiles’ to every sector.”

“Hosting Bangkok International Motor Show not just helps stimulate the industry, it also gives a direct impact to economy, especially the employment because throughout the show since the first set up date to the last dismantling date, it requires 10,000 workers per day to get the job done. Consequently, more than 500 million baht is circulating during the show, which is dubbed another stimulus to the economy in general.”

For the number of reservations in the show, it is approximately 2 hundred thousand units, which increases from the last year by 51.5 percent. The auto companies that receive the highest number of sales are as follows;

Total motorcycle reservation is1,155 units. The motorcycle brand that acquires the highest number of reservations is Yamaha with a total number of 815 units. The second rank is Suzuki at 131 units, and the third one is Harley Davidson at 126 units. The fourth rank is VROOM, the distributor of KTM, Bajaj and Husqvarna, KTM at 83 units. Meanwhile, Honda motorcycle wishes not to inform the reservation result. For “The 43rd Bangkok International Motor Show”, it will be held from 23 March to 3 April, 2022, VIP day is 21 March and the Press day is 22 March, at IMPACT Challenger Hall 1-3, Muang Thong Thani. 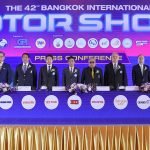 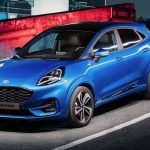